[Dennis Tan dreaming – photo taken by Lisa Kelly during her Singaporean trip of 2007. Not from Mental Sculpture exhibition as described below, but it looks pretty similar! Actually this is from the work Mind of a City by Judy Cheung – read about it here.]

Back in 2000, while I was waiting for the Olympics to finish before returning to Australia, I stayed, for a long three weeks, at the home of Singaporean artist Dennis Tan. During that period, Dennis was working towards an installation and CD called Mental Sculpture at the Substation Gallery, and I was lucky enough to be around while he was mixing the sound work. We became great friends, and I was such a fan of Mental Sculpture that I wrote a fairly wacky catalogue essay about it. I had forgotten all about that piece of writing until I stumbled across it the other day over at ArtSingapore . I reproduce it below.

(By the way, rummaging around I found three tracks from the CD, which I’ve posted online for your listening erudition: track 1 , track 2 , track 3. They’re all MP3 at about 1MB in size.)

Mental Sculpture – The Work of Dennis Tan
By Lucas Ihlein

No sooner had the reverberation of my blows sunk into silence, than I was answered by a voice from within the tomb! – by a cry, at first muffled and broken, like the sobbing of a child, and then quickly swelling into one long, loud, and continuous scream, utterly anomalous and inhuman a howl – a wailing shriek, such as might have arisen only out of hell*

A sinister thread binds together Dennis Tan’s short audio pieces created for the exhibition Mental Sculpture. Wailing birds, whippersnippers, galloping horses, cash registers ringing incessantly – these are among the soundbytes Tan has sampled, swallowed and regurgitated, chewed once more, and spat up almost unrecognisably for broadcast in the gallery. Almost unrecognisably. For many of the resulting audio tracks hover in the compelling space between abstract electronic sounds and recorded repressions – inviting repeated playback, as our intrepid brains try to piece back together the original sounds.

Occasionally a horse’s whinny morphs into the revving of an engine, which in turns slows its revolutions to such an extent that it becomes a giant’s belly-grumbling. Other pieces begin as a simple premise, only to travel far from their point of origin – such as the attack and decay of a ringing bell, played back and forth against itself until it becomes an almost pure electronic resonance, unable to be reconstructed. Or rather, to be put back together again in entirely new ways by the listener – for Tan does not intend that the sounds be read as the ‘work’ itself, but merely as a source of stimulus, for the creation of new ‘Mental Sculptures’ by the audience.

Perhaps this process is akin to taking the eggshell fragments of Humpty Dumpty and gluing together a huge chicken instead, or eating those fragments and shitting them out later, using the rich manure to grow a daffodil. In reality, however, the kinds of forms and narrations ‘sculpted’ in the minds of Tan’s listeners will be shaped by the way he has edited and crafted his aural stimuli.

Here is how I saw the transfer from Tan’s work to my own brain:

the dark, dank, urban wailing of psychotic cyberbirds pierces its aluminium way into our eardrums producing…

…black utility wagons pulling horse-carriages. They scream past as I struggle down these dark back streets looking for some friendly face. But I don’t belong here, that much is clear, and my fear leads me to enter an open door, the first I come to. It’s a damp hallway with rotting linoleum but it’s a place to lay my exhausted body for a moment;

…the first sounds I register are the ringing of cash tills. I raise my head, there are two in the room, big ugly creatures dinging hard at one another, striking their duelling reverberations deep into my skull. They barely notice me, but jingle their coin purses louder and louder, smashing windows and letting the dusty city air into the shop;

…a car alarm sounds. Nobody seems to notice, the drums continue their sacrificial call, the fire begins to crackle as I am led to the centre of an empty lot. I hear a whippersnipper, they must be clearing more grassland for carparks;

The ‘Mental Sculptures’ that I produced while listening to Tan’s CD have taken linguistic form, but that is by no means the only way his audience might respond. It could be that his sound work inspires a drawing, a dance or a piece of music, for example. Even resulting conversations in the gallery fall within the realms of his conception of ‘Mental Sculpture’. Closer to Tan’s intention, though, is the field of intangible, fleeting and dreamlike imagery that might never take any other form than the flashes and firing of synapses inside the brain. Non-physical, maybe non-communicable. Something like Jung’s definition of dreaming as a creative act, ‘ten fingers of a man who knows nothing of music wandering over the keys of a piano’.

That sound is a useful medium for evoking a sinister atmosphere is hardly surprising, given the effect of horror movie musical scores, for instance. The deprivation of the visual senses, too, gives us the freedom to ‘image’ for ourselves. To that end, Tan minimises visual distractions in the gallery, allowing us to concentrate as much as possible on the sounds being broadcast – such that we might approach these sinister audio-objects, and perhaps pass through them to the space of imagination which lies beyond the aural looking-glass.

Mental Sculpture was held at The Substation from 20-30 October 2000.

—
*Edgar Allen Poe, ‘The Black Cat’, in Complete Stories and Poems of Edgar Allen Poe, Doubleday, New York, 1966, pp. 63-70. In both this story, and Poe’s ‘The Tell-tale Hear’t, the downfall of the murderous narrator is caused by ghostly sounds from beyond the grave. 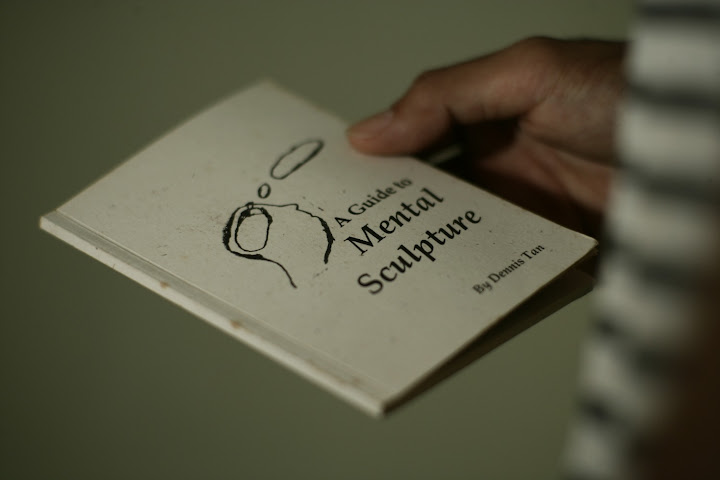