Yesterday after a long lunch with Trevor, Anthony and Hanting near Observation Society, Trevor and I decided to walk the small creek that I spotted yesterday from the window of my hotel room.

The creek runs very close to the OS gallery, it was only a matter of 30 seconds to reach it from there. I asked Trevor if the creek had a name, he said it was just generally known locally as the “smelly river”.

The waterway looks more like a canal, with stone walls shoring up the edges. Unlike our creeks in the Illawarra, it’s clearly an official recreational route, with pathways all along and people jogging and riding bikes.

To walk this little “joiner” of a creek is to realise just how vast Guangzhou is. It looks like a small distance on the map, but it took a few hours just to do less than half of it, heading north. Here’s Trevor inspecting the map as we decide how much of the river to tackle: 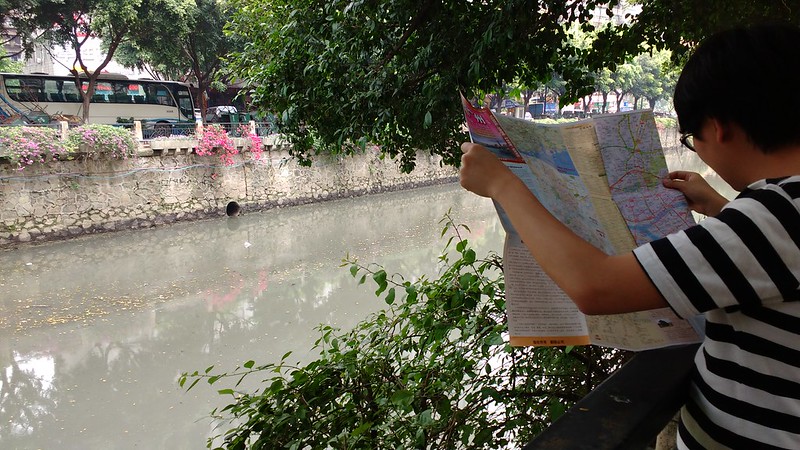 The “x” marks on this map show how far we got: 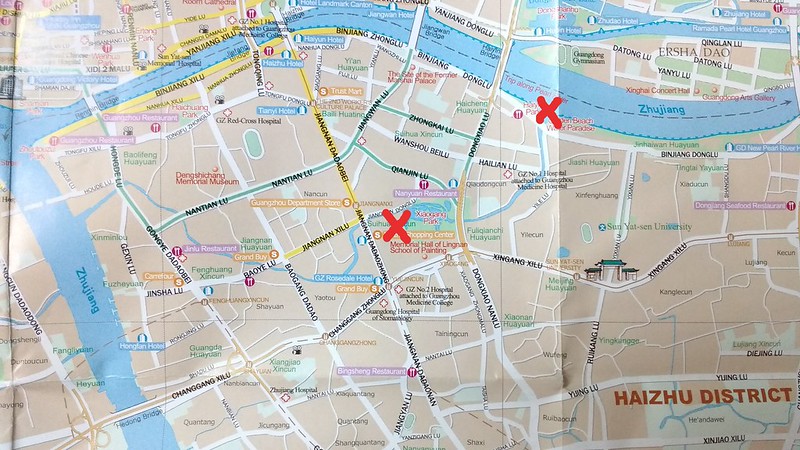 There were numerous obstacles, bridges and giant highway obstructions, as well as outflow pipes from the surrounding neighbourhood which flow into the creek, and fat hydraulic pipes spanning its breadth. 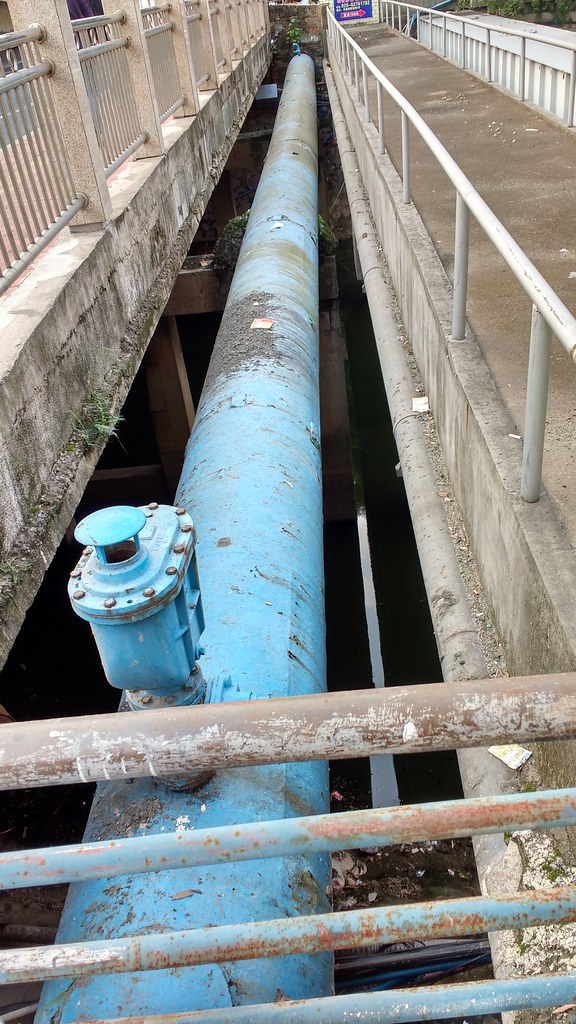 At one point we had to make a huge diversion due to a blockage of the river where it looked like a new roadway was being built. The waterway was completely blocked by a dump of rubble. This might be one of the reasons the water is not moving at all, and why it’s on the smelly side. 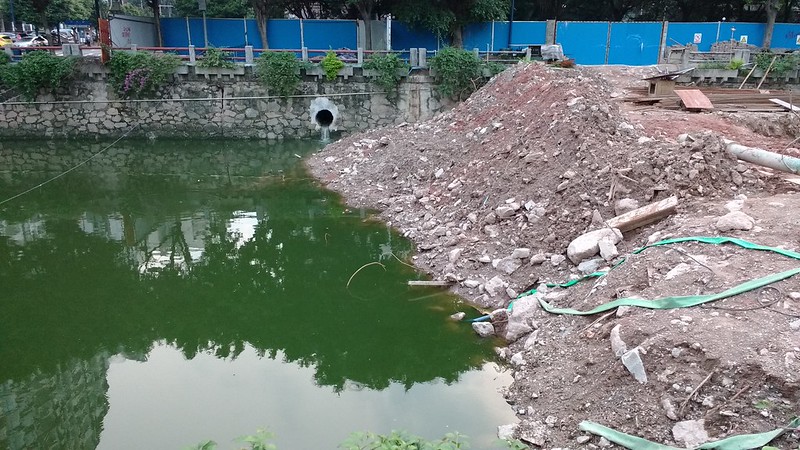 Our diversion took us through a market selling vegetables, plastic household items, as well as live animals like eels, frogs, turtles and scorpions: 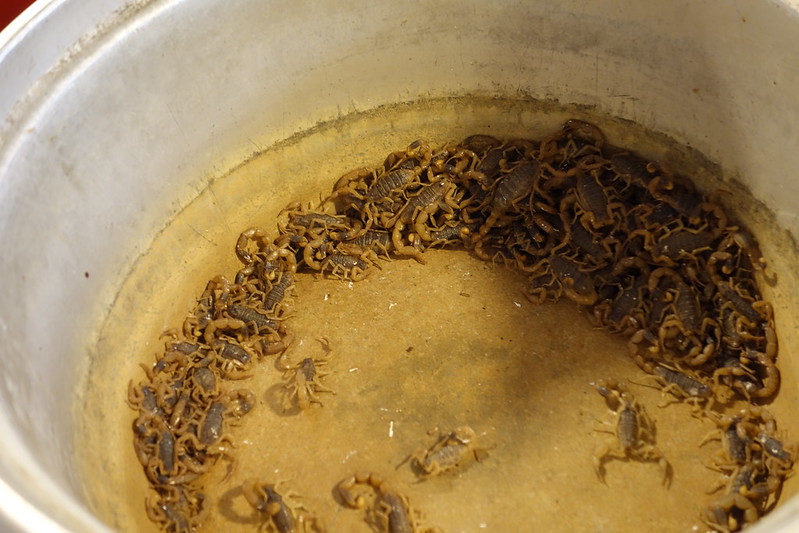 Trevor lives in Hong Kong, and hasn’t had much time to explore Guangzhou beyond coming here occasionally for exhibitions, so this was as much an adventure for him as it was for me.

And although this walk was an urban exploration of sorts, getting to know the neighbourhood, it was also very much about the two of us spending time together, getting to know each other, while moving continuously through space, with “adherence to the creek” as a guiding score.

And as Trevor said halfway through our walk – after a while you don’t even notice the smell. 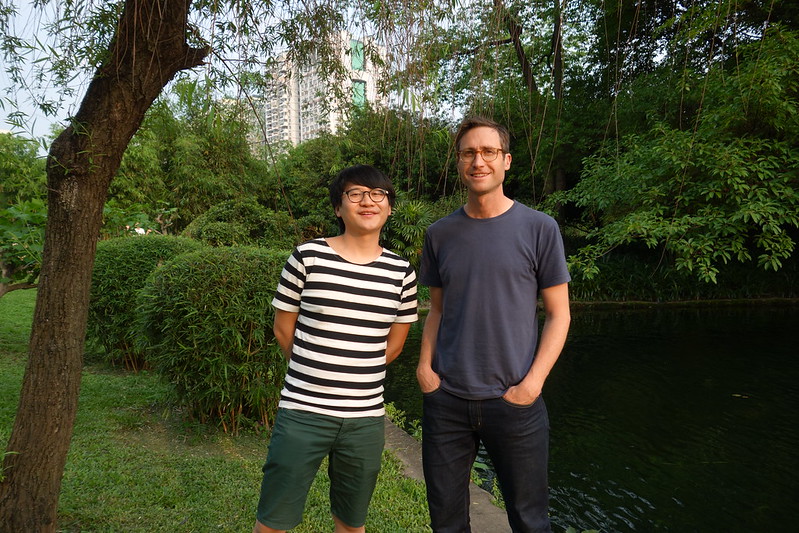 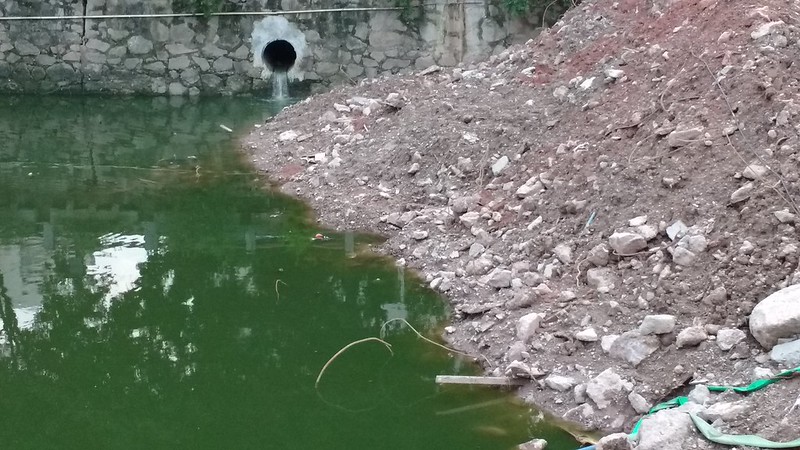 I’m in Guangzhou for a short residency organised by Gallery 4A in Sydney, and hosted by Observation Society (OS) here. In early June, I’ll have an exhibition at OS together with GZ/HK artist Trevor Yeung.

Yesterday in my haiku I couldn’t look past the bright blue roofs on the houses in the low-lying neighbourhood below the 46th floor of my hotel window. Today, peering closer at them to try and work out why they were so blue (I can only guess that the blue roofs are the ones that have been more recently repaired?) I noticed something even more interesting – a small waterway wending its way through this district: 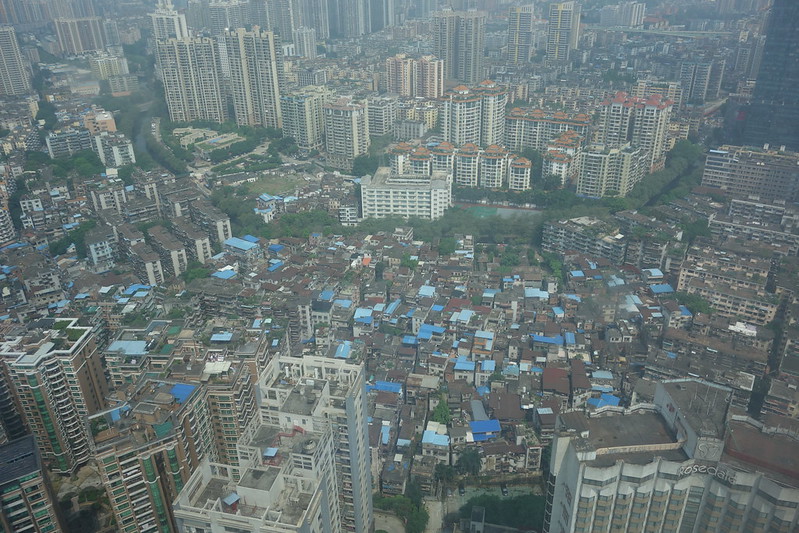 The waterway you can see in the upper left and upper right of this picture, it sort of loops down towards me and then away again, and its surrounded with dense green growth on both sides. Here’s a close-up: 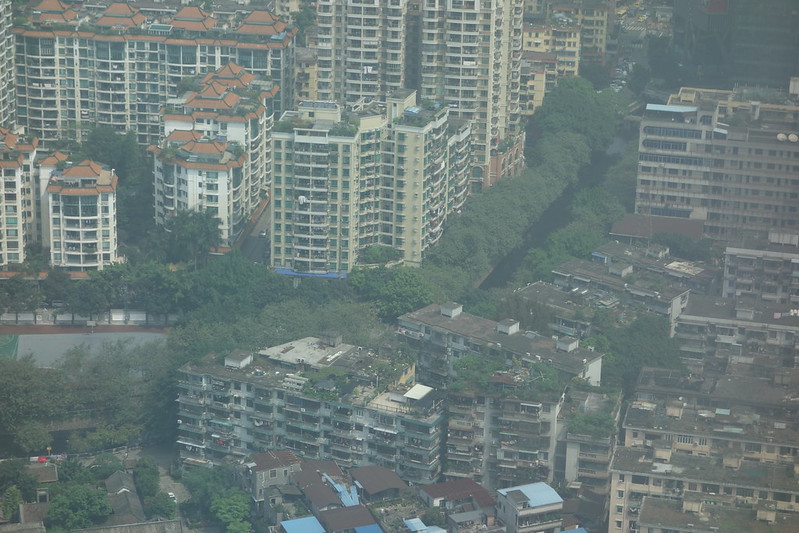 On my map, this seems to be an odd thin creek (or canal?) which cuts off a the corner of the Zhu Jiang (Pearl River). There do seem to be a lot of these creeks running through this district. 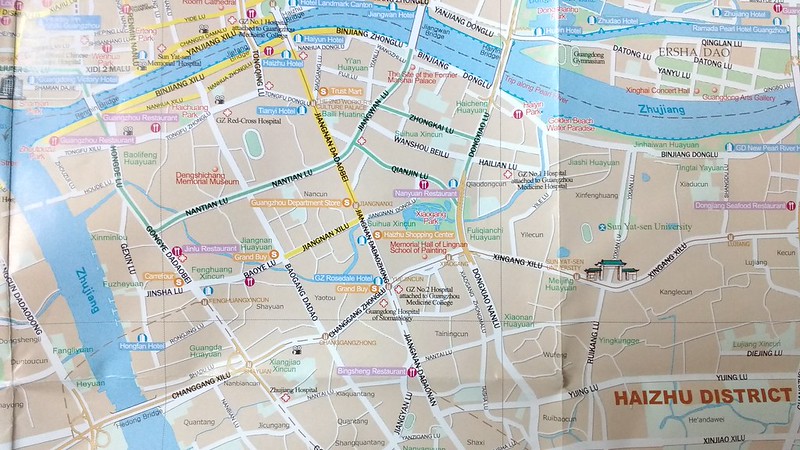 The whole Zhu Jiang is part of a massive river delta, which I presume means that the land is very low lying, so that instead of running fast and cutting deep into the land on its journey to the sea, the river slows down and spreads its energy in all directions.

Being in such an unfamiliar place, and where I don’t speak any Cantonese, it came as a great relief to see that local creek.

I’m off to see if I can find it with my feet now.